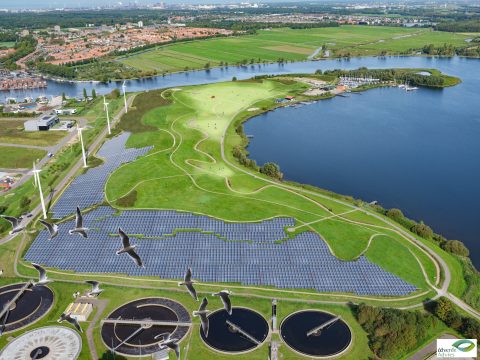 In the context of the International Climate Agreement, the Dutch government has proposed the Regional Energy Strategy (RES). This includes a planned transition to sustainable energy that requires commitment from regional and local governments, social partners and the business community. Afvalzorg, as a leading specialist in the redevelopment of landfill sites in the Netherlands, has all the necessary experience to tackle the challenges involved in this particularly complex assignment. Our most recent project is a solar field located on a former landfill in an urban area in the Netherlands. Landfill sites are potentially ideal locations for contributing to a more sustainable future.

In 2019, the Dutch government carried out a national inventory to determine the available capacity for sustainable electricity production (wind or solar) on land in the Netherlands. This programme is known as the Regional Energy Strategy (RES). The RES states that the goal of the Netherlands is to produce 35 TWh of sustainable electricity by the year 2030, 26 TWh of which is already being developed or about to start. This means that the remaining 9 TWh still needs to be realised within a relatively short period. It is yet to be seen where exactly this power could be generated on land, given that land area is limited in the Netherlands. By way of illustration, generating 1 TWh of electricity requires approximately 1,000 hectares of solar power panels, which translates to a land surface area requirement of approximately 9,000 ha.

Afvalzorg is convinced that landfills provide an ideal solution for sustainable electricity production, as their use doesn’t sacrifice any agricultural, forest or urban land area. It also adds another layer of functionality within the life cycle of landfills. With this vision in mind, Afvalzorg has been developing several solar power projects on multiple landfills since 2013. One of our latest projects is a new solar power field with a capacity of 3.5 MWp at the former Schoteroog Landfill in an urban area in the Netherlands. Schoteroog Landfill dates back to the 1980s and was used by the municipality of Haarlem. It is almost 22 hectares in size. Afvalzorg has previously played a vital role in the rehabilitation and transformation of Schoteroog into an environmentally safe recreational park. Residents of Haarlem have been visiting the park on a daily basis for almost two decades. However, it could potentially contribute to energy requirements in the future too. This solar power field is capable of providing approximately 3.3 GWh of electricity per year, and will be realised by 2023.

The version of the browser you are using is outdated and is not supported.
Upgrade your browser to make optimal use of the website.